When we began in 2004, the property was a dumping ground for yard debris. About 95 percent of the trees were Norway Maples and there was virtually no ground cover at all anywhere. The only native trees present were one large old White Oak and 2 dying Ash.

The slope faces north, and there are houses and retaining walls along the south side of it, so it doesn’t get a lot of sun. The shade and dryness caused by the Norway Maples, hard clay fill soil, and shade from the structures make it a difficult site to grow vegetation on.

We left most logs on site to rot and build up the humus in the soils. They also hold soil and leaves in place to help the plants grow, and it saved the owner a lot of money.  Space was left for a trail but it was never built.  We would have left a lot more of the cut brush, but there was so much that it would have buried the site in branches several feet deep.

Two years later this is how it looked. Growth is slow because we left some Norway Maples to provide a canopy and it’s still dry so plants don’t grow as quickly as they would on a more favourable site.

Here it is again in 2009. Plants are filling in all the open spaces.  Ground coverage is excellent. 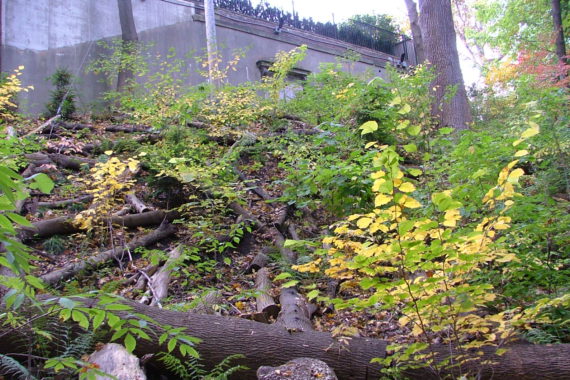