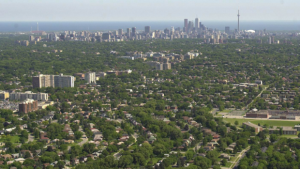 A new “Treepedia” project, which maps out and ranks urban canopies in major cities, has touted Toronto’s tree canopy as one of the most luxuriant in the world.

However, silviculturists say a lot of work needs to be done to keep the city green, as climate change, ice storms and invasive species continue to threaten Toronto’s tree population.

In the CBC article about the project and city rankings, UFORA’s Stephen Smith said emerald ash borers, a type of Asian beetle, are wiping out the city’s ash trees, which make up about eight per cent of the canopy. “There are some neighbourhoods, like parts of Scarborough, that are being just about clear cut because all of the trees are dying,” he said. “That’s a major stress.”

Read the full article on CBC…